A key debate during the referendum campaign was on whether immigration exercised a downward pressure on wages or not. This was prominently argued over during the TV debates and if the Ashcroft polls are to be believed, the second most important reason given by Leave voters for their choice of vote was hat leaving “offered the best chance for the UK to regain control over immigration and its own borders.”

Among both Labour and Tory supporters who voted Leave, the most important consideration was : “the principle that decisions about the UK should be taken in the UK”.

Since the Leave result on Friday morning social media has been full of Remain voters complaining about the ignorance and xenophobia of working class voters in the North who gave border controls as a motive for voting against the EU. But were the fears expressed about the effects of immigration from within the EU just ignorant prejudice, or did they reflect something real?

The Remain campaign, during the TV debates, emphasised the contribution that immigrant workers made to the economy and particularly to the NHS, pointing out that they were hard workers who paid taxes and contributed to the national exchequer. But that was to spectacularly miss the point. You do not reduce people’s worries by saying the EU immigrants work hard. Hard workers who will accept low wages, are likely to seem more of a threat than people who take it easy.

Does competition with immigrant labour tend to reduce real wages?

Here is a scatter plot showing the relationship between immigration and exploitation in the UK since 1970. 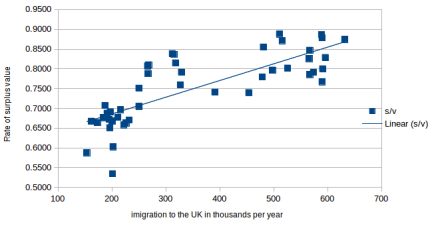 Now statistical explanation does not necessarily imply causation. If we have a causal theory linking to phenomena, then correlation provides confirmatory evidence for the theory, but you need a causal model first.

Well there is a theory explaining why we should expect this. It was set out in the chapter of Marx’s capital dealing with the law of capital accumulation. He described a process whereby periods of rapid capital accumulation would drive down unemployment, raise wages and reduces exploitation. This, he said, would then provoke a reaction. Slower accumulation would then increase unemployment and allow exploitation to rise. Basically the more competition workers faced from what Marx called the Reserve Army of Labour, the higher would be the rate of exploitation and vice versa.

What Tony Blair’s decision to allow free movement of workers from the EU accession countries did was to dramatically increase the size of the effective reserve army of labour competing with workers here. That necessarily increased profits at the expense of wages. When both Labour and Tory remain campaigners pretended that this was not happening, they were simply not believed, which is a key reason that the Remain campaign failed.
Countries that allow easy immigration can offset the tendency of the rate of profit to fall.
Immigration boosts the working population in three ways:

More rapid population growth boosts the rate of profit by two distinct mechanisms. One the one hand a more rapid expansion of the labour force increases competition for jobs and allows the rate of exploitation to be increased. Secondly a growing population absorbs accumulated capital preventing, or at least slowing down, a rise in the capital to labour ratio.

What we see in the UK is not some idiosyncrasy, but a general tendency of capitalism. Profitability and exploitation are helped by rapidly growing workforces.

The effect of a rapidly growing population is most strikingly seen if we contrast an emerging capitalist economy like South Africa with a mature one like Japan.

On the left you see the trend of the profit rate in South Africa, on the right the population. The solid line on the left is the predicted rate of profit obtained by comparing the accumulation of capital to the growth of the workforce. The actual profit rate is the dotted line. See how the high population growth gives a high predicted rate of profit, which is achieved some years later. In such nations the capital accumulated each year is insufficient to keep up with the rising population, so the capital to labour ratio falls. A lower capital to labour ratio then gives rise to a higher rate of profit.
Ultimately it is sex that drives capitalism. The soaring profit rate in South African capitalism is driven by the much greater sexual productivity of South African women. South African fertility was still 2.5 in 2008 against only 1.3 in Japan. But South Africa is already on the path towards capitalist maturity. Its 2008 fertility rate was only half what it
was forty years earlier. In other African countries the demographic transition is barely starting. In Nigeria, fertility in 2008 was a huge 5.7 children per woman, in Zambia 5.8, in Tanzania 5.6. Equatorial Africa is, in the early 21st century, capitalism’s last best hope of profitability. 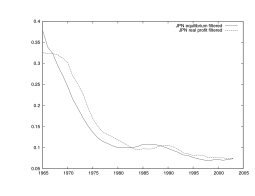 Now compare that with Japan where fertility is so low that the population is shrinking and you see what that does to the profit rate on the left.

Exploitation and profitability depend on rapidly expanding workforces. For the left to adopt the Blairite cant that immigration does not degrade the social position of working class voters would be to cede realistic political economy to UKIP.

23 thoughts on “Brexit, immigration and exploitation”