I shall be elaborating on the following theses:

In the process I will address what I see to have been misconceptions about communism on the part of the Soviets, before going on to look at the transitional stages a modern economy would need to achieve communism.

1 What is a mode of production

This conception had been expressed by Marx ten years earlier in his pithy phrase :

In this conception the essential feature of capitalist production is that it is machine industry, production by means of (steam) powered machines. But this should give us pause to think, for is not socialism also characterised by machine production, by the use of artificial forms of energy?
Recall that Lenin expressed this very idea when he gave the following equation:
Socialism = Soviet power + Electrification
Since the difference between steam power and electrical power is secondary, and we know that capitalist economies also use electricity, the important point is that capitalism and socialism share the same mode of production.
We can summarize this in two equations defining the mode of production:

The significant differences are firstly that socialist production relations can restrict the commodity form to the consumer goods market. Within the publicly owned sector there is no change in ownership as means of production go from one state factory to another – hence these goods are not commodities. Secondly the socialist economy substitutes public for private ownership. Third it replaces the anarchic market with directive planning. These are differences in production relations but not in the mode of production.

2 Marx vs USSR on Communism

Marx, in Critique of the Gotha Programme presents a three stage process of transition to communism.

Note that even in the first stage Marx assumes the abolition of money. There is also – contrary to the impression spread originally by Bukharin[1] – no mention in Marx of the idea that all goods will be distributed for free in a communist system. Distribution according to need is based on an objective assessment of need – life saving healthcare may be freely available to those who need it, but cosmetic surgery -no.
Now let me contrast this scheme with what became the Soviet orthodoxy derived variously from the Bukharin text mentioned earlier and from Stalin[18]. Again we have a 3 stage model

The significant differences are that the Soviets identified the first stage of communism with something much less radical : socialism. They forget that Socialism was a much wider trend than communism, and that in the Communist Manifesto a whole chapter was devoted to explaining how the Communists were different from socialists. The socialism of the USSR was essentially the 1902 socialism of the still revolutionary Karl Kautsky[17,10]. All the key elements were in that work by Kautsky. The pretence that a socialist monetary economy was the same thing as a non monetary communist one, was a misrepresentation.

3 Why did USSR not reach communism?

The material and technical basis of communism will be built up by the end of the second decade (1971-80), ensuring an abundance of material and cultural values for the whole population ; Soviet society will come close to a stage where it can introduce the principle of distribution according to needs, and there will be a gradual transition to one form of ownership-public ownership . Thus, a communist society will in the main be built in the U.S.S.R . The construction of communist society will be fully completed in the subsequent period. (Programme CPSU 1960)

The USSR in 1960 was still very ambitious. They had a very optimistic time table for overtaking US and in many key industries this goal was in fact achieved. The transition to communism was seen solely in terms of quantity of output not in terms of changed social relations. A key technical development was still seen to be electrification: Electrification, which is the pivot of the economic construction of communist society,plays a key role in the development of all economic branches and in the effecting of all modern technological progress. It is therefore important to ensure the priority development of electric power output. It is notable that no particular attention was paid to information technology as an enabling technology for communism.

How well did they actually do? Well table 1 shows that in their key goal of electricity the USSR was already by 1990 doing better than the leading European capitalist countries had achieve a quarter century later.

Table 1: Comparison of power available to different economies converted into human labour effort equivalents per head of population. Assumption is that a manual worker could do 216 KWh per year of work.

Was this enough power for communism?

What about food production?
How well did the USSR achieve its goals there?
Pretty well according to Table 2.

Table 2: Comparison of late Soviet with UK, Brazil and US annual per capita output of major protein foods. Note that for all categories the late USSR had better figures. Sources [14], FAOSTAT and USDA databases.

Was this enough food for communism?

Under communism there will be no classes, and the socio-economic and cultural distinctions, and differences in living conditions, between town and countryside will disappear ; the countryside will rise to the level of the town in the development of the productive forces and the nature of work, the forms of production relations, living conditions and the well-being of the population. (Programme CPSU 1960)

But the concrete programme gave no measures to abolish classes or abolish money and commodities. When the impossibility of continued 10% growth made itself felt, this was seen as the failure of communism, since social change had not been at its core. If society was not moving forward, it failed to morally inspire people and by the late 1980s communists could not resist the pressures from capitalist ideology.

Only money provides a rational basis for comparing costs Calculation in terms of labour time impractical because of the millions of equations that would need to be solved.

There was some limited truth in this. Marx s communism was not yet possible in 1960 due to limitations in information processing. Marx s Communism stage 1 assumed

But to work out the labour content of every good required the solution of millions of equations. 1960s computers were not powerful enough. This had its effects in limitations of Soviet Socialism.
Money was still needed for economic calculation even in the planned sector. There was a problem of aggregation in planning which required setting monetary objectives. There was an inability to handle disaggregated plans at all Union level. Money was still needed for wage payments. But cash led to black markets, corruption and pressure to restore capitalist relations.

5 Key developments in productive forces since 1960

But since 1960 there have been a set of technical advances that allow us to remove these old objections to communist economics.

allows concentration of the information needed for planning.

can solve the millions of equations in seconds – von Mises objection

How easy is it to solve the millions of equations. There are some problems that become computationally intractable even for the largest computers. Is economic planning or the use of labour accounting like that?
No it is not. In a series of papers[2,6,5,4,9,8], Allin Cottrell, Greg Michaelson and I have shown that the computational complexity of computing labour values for an entire economy with N distinct products grows as Nlog(N) This means that it is highly tractable and easily solved by modern computers

It is also possible to harness computer networks and mobile phone voting to allow direct democratic control by the mass of the population over the economy. This allows major strategic decisions taken democratically, questions like: How much labour to devote to education? How much to health, pensions, sick? How much to environmental protection? How much to national defence? How much to new investment?
All this can be done by direct voting using computers or mobile phones every year. We have prototyped software to aggregate the wishes of the public this way[7,15,16,3].

Marx s principle was that non-public goods should be distributed on the equivalence principle – you get back in goods the same amount of labour – after tax – that you perform. Hence goods are priced in labour hours. Cybernetic feedback from sales to the plan adjusts output to consumer needs as shown in Figure  1.

Figure 1: Cybernetic planning
Marx argued that calculation in terms of labour time would lead to greater efficiency. The wages system undervalues the real social cost of labour and deters the use of the most modern machinery. Transition to communist calculation will lead to the rational use of labour time, and faster growth of labour productivity.

Figure 2: The growth of labour productivity has been shrinking over the last half century in the UK. Growth rates computed as moving average over last 5 years fron ONS data for output per worker for the whole economy. 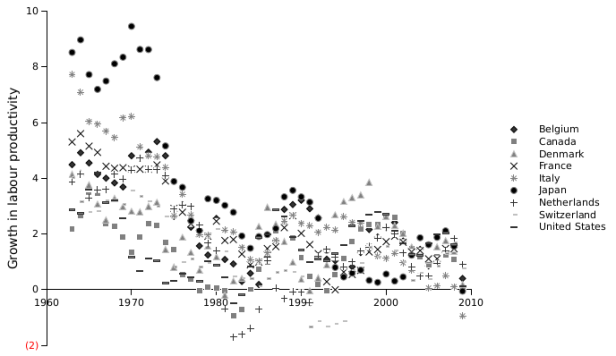 Figure 3: The decline in productivity growth is an international phenomonon. Data obtained from Extended Penn World Tables. Note that this data only goes up to the start of the 2008 recession.
Throughout the capitalist world this law is in effect, slowing down the growth of labour productivity. The capitalist class seek cheap labour, which systematically holds back technical progress. They show chronic unwillingness to invest. Orthodox economists call this secular stagnation .
You can see the effect clearly in the decline in the improvement in labour productivity shown in Figs 2,3.

The proletariat will use its political supremacy to wrest, by degree, all capital from the bourgeoisie, to centralise all instruments of production in the hands of the State, i.e., of the proletariat organised as the ruling class; and to increase the total productive forces as rapidly as possible.
Of course, in the beginning, this cannot be effected except by means of despotic inroads on the rights of property, and on the conditions of bourgeois production; by means of measures, therefore, which appear economically insufficient and untenable, but which, in the course of the movement, outstrip themselves, necessitate further inroads upon the old social order, and are unavoidable as a means of entirely revolutionising the mode of production.
These measures will, of course, be different in different countries.[13]

Nevertheless, in most socialist countries, the following communist measures will be pretty generally applicable.
Immediate measures

During the preparation commodity exchange between enterprises still exists, and monetary transactions still possible, but exploitation is eliminated. In the next stages the following measures might be appropriate:

Technical advance on a world scale is being held back by the wages system. There is a growing contradiction between the social relations of capitalism and the potential of the new productive forces. The new information technology permits a direct transition to communist mode of calculation. The new communist relations of production will abolish class differences and allow technical and humanitarian progress to resume.

24 thoughts on “Big Data and Super-Computers: foundations of Cyber Communism”